«With Book You Are Never Alone» 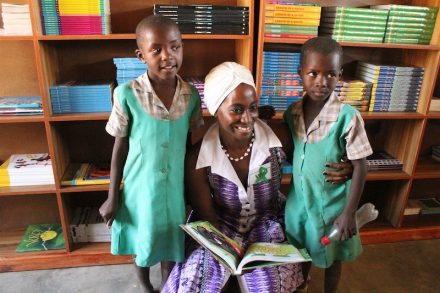 “I am a cultural hybrid. I was born in Spain from African parents, became an American citizen, and have been living in New York City for the last eighteen years.”

My first trip to Ghana was almost seven years ago. Like many visitors who have traveled there, I fell in love with the people and the country; I returned from the trip with a desire to contribute, and help Africa develop and grow.

There is a serious need to build infrastructure to empower people though education, health, and medicine. I was inspired to work on increasing the supply of something very close to my heart: Books! Since then, I have been working to create an African Literacy Project, focused on building libraries around Africa, with the first one established in, Kokofu, located in the Kumasi Region in Ghana.

I came into contact with William Kamkwamba through this project. His family could not afford his tuition fee, and were unable to support his school attendance. Through the program he read a book on windmills, learning their use as an alternative and powerful energy source. William Kamkwamba became inspired to build a windmill, which later created enough electricity to power his own household and eventually his entire village.

I believe there are more young men and women like William Kamkwamba in other parts of Africa and I would like to supply them with books that can inspire them in similar ways.

Why begin the African Literacy Project in Kokofu? John Hutchinson, my guide in Ghana, asked me if I didn’t mind passing by Kokofu on our way to Kumasi in order to check the house of a former U.S. resident who was building a home in the area. While there, I met Barima Offe Akwasi Okogyeasuo II, the Chief of Kokofu, who granted me with the honor and title of “Queen Development Mother.” With this title, Chief Okogyeasuo II offered me a piece of land, where we decided to build the first BBALP library.

To witness firsthand a child’s excitement when they receive their books is priceless, and heartwarming to see them entering the library’s premises. The Kokofu library has since become a community project, a focal point for both the families and communities to practice togetherness and emphasize on our common love for books.

The literacy project has since grown, and we now have library projects benefitting children in Ghana, Kenya, Zimbabwe and Uganda. We have cooperated with various schools, educational institutions and other partners to send books over to Nigeria, Equatorial Guinea, Cameroon and South Africa. We created the BBALP Scholarship Fund in order to help talented children get access to education in countries such as Zimbabwe, Kenya and Ghana. And this year 2018 our dream and task is to open a library in Senegal! We are on it!

The important lesson I have learned from this experience is that: “It takes a little to do much.” We believe at BBALP that education is the door opener for new opportunities and I keep finding, along the way, very supportive people to my vision, for which I am very thankful.

Every library and every country is an adventure. Collecting the books for the children, finding the right partners, meeting the children in person, having the opportunity to read some stories to them is a beautiful experience all in one that I would like to pursue in other countries with the simple goal of spreading the love for books.